Skip to content
Home/Inequality in the Energy system
Previous Next

Inequality in the Energy system

Inequality in the Energy system
South Durban Community Environmental Alliance (SDCEA) hosted an energy meeting at the Austerville hall. The meeting was to discuss the strain of load shedding and tariff hikes in the communities and what is needed to change the energy regime. 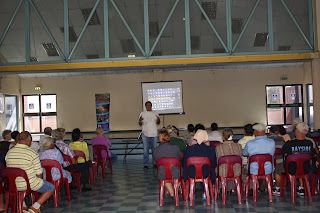 Community participants said that the problems with electricity had led to job losses, children not going to school; unhealthy eating and increase in crime, and people are still getting unaffordably high electricity bills despite load shedding and regardless of using less electricity. They noted that Eskom is applying to NERSA (National Energy Regulator of South Africa) for another tariff rise and demanded that NERSA should consult the people before making a decision.
“Eskom is not giving people a chance to speak against the increases,” said Desmond D’Sa, SDCEA Co-ordinator, Eskom were originally awarded an 8% increase. This was increased without public participation to 12.69%. Now they want another 12.61% to make a total increase of 25.3%. People cannot afford this. They cannot afford electricity even at the current rate. They are already struggling to pay the bill.
The municipality makes this worse because it bills people on the basis of estimated use of electricity. This is extremely unfair, especially if people are cutting their energy use and also experience load shedding. He concluded by stating that we need people to mobilise now as we have a short period of time before the tariff increases are enforced.
Noluthando Mbeje (SDCEA Communication and Project Officer) spoke about the energy system in South Africa. She explained all the different sources of energy and how they are used to generate electricity. Coal is the biggest source of energy in South Africa but it has very a serious impact on people’s health and their environments. Renewable energy is much better because it is environmentally friendly and does not harm people. She showed examples of renewable energy that can be used at home. The meeting called for Eskom to move to renewable energy.  A certain percentage of the billions of rands raised for mammoth polluting power stations, should be allocated to renewable energy for long term sustainable power supply.
The meeting noted and fully supports the proposal of Durban Municipality to enable individual power generators to be able to feed their unutilised energy back into the grid.  It further called upon the authorities to subsidise or incentivise the installation of household renewable energy production (such as solar geysers) and energy saving devices.
Louise Colvin (SDCEA Volunteer) presented on the inequality of load shedding. The current load shedding schedule is divided into four blocks:
1.    Residential – peak times evening (6 – 10pm) & early morning (6-8 pm)
2.    Commercial – peak time the day 8am – 4pm
3.    Industrial – only load-shed in extreme power shortage
4.    Key strategic areas – (hospitals, security, port/refinery, water/waste water etc) – no load-shedding
Taking aside categories 3 and 4, the big problem is that load shedding is not fairly allocated across residential areas.  Most of the commercial areas are in fact predominantly residential.  So Durban including Durban North & Westville, Umhlanga and Amanzimtoti suburbs onlyexperience load shedding  during the day, whilst the rest have the far greater inconvenience of evening and early morning power cuts.  This ‘residential’ block is made up of all the outlying areas which includes among others all the townships, Chatsworth, Phoenix/Inanda, Newlands, all of South Durban, etc. Although it may not have been planned it is smacks of discrimination – as it is yet again in the main the poor and working class communities that are paying the price, (with some exceptions such as the Highway suburbs). 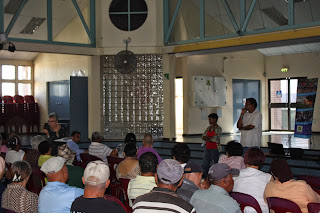 To make matters worse, the current system is far more inequitable.  Since the beginning of May Eskom is only load shedding at peak evening times not because they cannot provide the power but to save costs as current supplementary power supply is highly expensive. That means the residential areas (Groups 1-8) are the only ones currently experiencing power cuts, which regularly go from no load shedding during the day to Stage 2 (or more)  resulting in being almost nightly. To illustrate the discrepancy – Musgrave etc will only have a couple of hours of load-shedding over the weekend, whilst South Durban will have it every night of the week and sometimes for four hours in a day.
Louise Colvin stated “We should not accept this injustice, especially when we are told this is fairer and causes the least inconvenience to fewer people. They shared the load-shedding between all residential areas before, why not now?  Other cities/municipalities do.
Merewent and Merebank and possibly more communities are experiencing long delays before power is restored (30mins up to 3 hours!).This has to be rectified.”
Community participants expressed frustration that big office blocks and industries are not ‘sharing the load’. “They light up the Sapref and Engen refineries 24 hours a day,” said one participant. Refineries and other big energy users should be monitored closely on their unnecessary use of energy.
It was concluded by the meeting agreeing the following demands:
1.    the residential and commercial areas need to have a clear and fairer distinction, even if it means more and smaller areas.
2.    Equitably share the load-shedding of ALL mainly residential areas across the good times (day and midnight – 5am) and the bad times (4-10pm & 5-8am) even if it means more often.
3.    Smaller suburban commercial areas should have load-shedding at the more convenient evening times.
4.    Don’t put all neighbouring areas off at the same time for greater convenience.
5.    As a last resort if the authorities will not change the schedule, they must include the so called ‘commercial’ block in the evening load shedding, when it is merely to save Eskom costs.
If engagement with the authorities produces no results, we should embark on a programme of mobilisation, media exposure, citizen’s petition and flooding the authorities with complaints.
By South Durban Community Environmental Alliance SDCEA|2017-07-13T07:36:48+00:00May 20th, 2015|Energy & Climate Change|Comments Off on Inequality in the Energy system