Skip to content
Home/Dark Dawn for African Dream
Previous Next 08 April 2015 saw Abahlali Basemjondolo[1] and other partner civil society organization’s hosting a march through the city center to highlight their disgust in the recent Xenophobic attacks that seem to be gaining momentum in each city it passes in South Africa.
The day was supposed to be just a peaceful march down the major street to draw the public’s attention to this increasing problem and to show how much this kind of behavior should not be tolerated by any citizens in any part of the world as we are all human beings. The South African government and the South African police role should be to protect and not allow these attacks by criminal elements who were seen looting in people’s shops and turning their acts of violence on innocent people.
The vision and hope of the organizers of this march was short lived when the SAPS and METRO police decided on their own accord that the march was no longer going to take place and went in to disperse the crowd that were already gathered there with water cannons, rubber bullets and stun grenades. This act of disrespecting their rights is a direct insult to human dignity. These acts were appalling and highly disturbing since all the relevant parties were informed and all protocol was followed and the protesters had not given any sign or reason for violent means of dispersion. 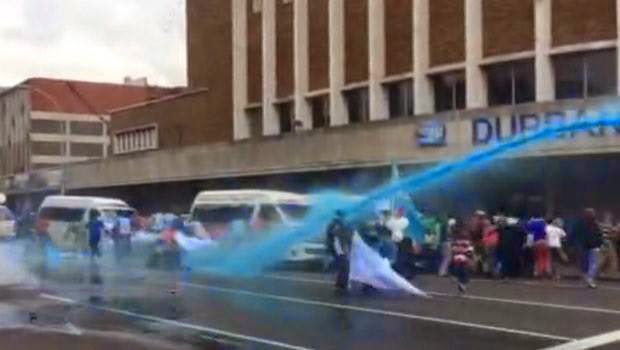 This was supposed to be the first event for the day dealing with the xenophobic attacks that seemed to be on the rise in the city. The second event was going to be a prayer vigil organized by Diakonia council of churches[2] and various religious leaders outside the city hall. This vigil was going to be the first of its kind whereby the religious leaders stood up and expressed how they are not impressed by the way the government is handling the whole xenophobia phenomena in the country. The vigil was turned into an attack on the foreign nationals that were marching all day when one of them was attacked by a local, a bigger fight was prevented by the police who were present in their numbers to keep calm and safety for all involved.
The rest of the afternoon was very tense when certain locals made their feelings towards foreigners clear that they didn’t want them anymore in their country saying they are a bad influence on the place as they bring about crime and drugs that destroy the community. The vigil was scheduled to be an hour long but had to be longer as these locals were becoming increasingly unruly and continued to threaten violence towards the foreign nationals that had no intention of getting violent with anybody.  The Cardinal of Durban Wilfred Napier called on the country’s leaders to take a stand and call the South African public to calm and encourage them to not resort to taking the law in their own hands and remind them that they had voted for them to deal with such issues when they arise and must be given the chance to do so.
The day ended when police offered to transport the foreigners to a place of safety in their many police trucks to prevent them from being the victims of the locals who were clearly not relenting from their threat.
Footnote:
[1] Abahlali basemjondolo is a shack dwellers movement well known for its campaigning against evictions and public housing. It is the largest shack dwellers organization in South Africa and campaigns to improve conditions of poor people and democratize society from below
[2] Diakonia council of churches is an economical inter-church agency, working with church organizations in the pursuit of a more just society.
By South Durban Community Environmental Alliance SDCEA|2015-04-15T08:25:00+00:00April 15th, 2015|Community Empowerment|Comments Off on Dark Dawn for African Dream