In Memory of Brenda Pratt (Ex-treasurer) 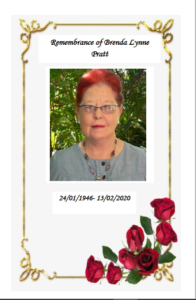 A Tribute to an Environmental Activist, Mentor and Teacher Brenda Pratt

Brenda Lynn Pratt was instrumental in the development of the South Durban Community Environmental Alliance for over 23 years. Her work within SDCEA was to play an important role of oversight as the treasurer of the finances. Brenda took her role as treasurer very seriously and imposed stringent rules where the SDCEA’s finances were concerned to safeguard the organisation as she genuinely cared and believed in SDCEA’s cause.

She played a crucial role in meeting with funders and urging them to assist the organisation with much needed funds for the essential work. The work SDCEA did was not pleasing to government and big polluting corporations; at a time when both government and polluting corporates were dead against the SDCEA exposing the pollution which affected the health of the residents of South Durban. Brenda had done a great deal of editing for the SDCEA newsletters, and for SDCEA’s 21 year booklet. Many of the SDCEA‘s publications bears her editorial comments. Brenda’s name is synonymous with the SDCEA as she attended most of the protests whether it was against Shell, Engen, the expansion of the Port and the hazardous trucks that traversed on our community roads. Brenda crossed the racial divide and she did not see colour in people ensuring that no matter where you came from you had her support.

Brenda was a monumental defender not only of the SDCEA but also for the people of South Durban. She was hell bent on challenging the government for failing to do their job in holding corporates accountable. Brenda was very persistent in her argument that government should do more to reduce the impact of toxic pollution.  Her resolve never wavered and gave her inner strength to continue her work as a trustee for South Durban Environmental trust.

Brenda worked as a teacher at Grosvenor Girls High School and went on to be the Head of Department of English at Crawford College, La Lucia.  Brenda was a great teacher, mentor an activist who played an important role in SDCEA. We are at a loss to say goodbye to such a staunch and strong member of the SDCEA family and we are honoured to have known and worked with her.