Skip to content
Home/Wentworth is stinking with an overflow of sewage, causing devastating health effects.
Previous Next

Wentworth is stinking with an overflow of sewage, causing devastating health effects.

Wentworth is stinking with an overflow of sewage, causing devastating health effects.

The eThekwini Municipality workers strike by Durban Solid Waste, Water and Sanitation and electricity units is causing grave concerns, leaving the city and many Durban communities in a stench. This is causing a health hazard.

“As you enter Wentworth, a strong unpleasant smell welcomes you, resulting in nausea and dizzy spells. The community is stinking. Sewage overflows the road way, rubbish left unattended to for weeks and a manifestation of rodents crawl the streets and into households,” said Maureen Rambhadursing, Director of the Poor Flatdwellers Movement.

This poses a significant health problem that can lead to all sorts of disasters.

Just further down, at the Durban habour, a large volume of litter, effluent and sewage is been discharged through the storm water reticulation system from a catchment area of more than 200km2 in size.

Environmental activist and Journalist, Oliver Meth expressed his concern after seen the contaminated water, both in Wentworth and the Durban Port.

“This poses a serious threat to both the marine life, those who fish alongside the habour and people’s health. We could have a serious outbreak of disease, if the city does not address the striking workers issues and clean up the mess,” Meth added.

“We are urging government to arrange interim domestic refuse removal services, as a means to prevent the health issues that will arise,” said Des D’sa, SDCEA Coordinator. 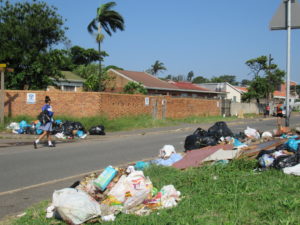 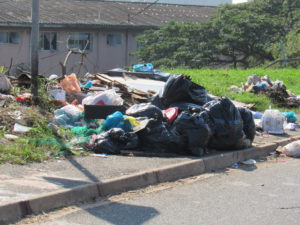 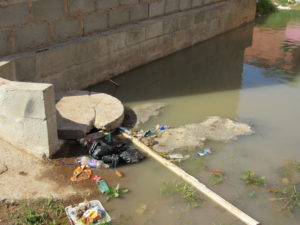