Skip to content
Home/Offshore Oil and Gas Workshop
Previous Next

On the 18th of July 2017, the South Durban Community Environmental Alliance together with Groundwork hosted an offshore oil and gas stakeholder consultative at the Austerville community civic centre. 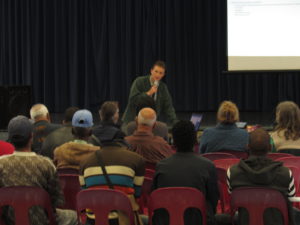 The purpose of the oil and gas workshop was to create awareness in the communities of proposed 3D and 2D seismic testing in our ocean. The seismic testing as presented will bring nothing but destruction to our marine environment, marine life and destroy the ocean. It is important we create awareness as the ocean plays an important role in the livelihoods of subsistence fishermen, beach users, surfers, business owners and the hospitality sector. Jennifer Olbers of Ezemvelo Wildlife provided an informative and interesting presentation of the observed impacts of seismic surveys on marine fauna on the East Coast. 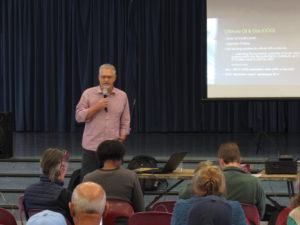 Adrian Pole an attorney in private practice charged with dealing of the issue of marine oil and gas exploration activities in our Indian Ocean presented on the legal framework and how as society we can place our arguments against the oil& gas exploration. His detail legal analysis was well written, easy to understand and very informative. He was able to explain the legal framework surrounding offshore oil and gas exploration activities, including the fault lines in the regulatory framework. He further gave input into the legal recourse for interested and affected parties and what should the next move be.

The final presenter of the day was Samuel Chademana of Groundwork. Samuel provided stakeholder mobilisation and push back strategies as well as an advocacy programme to lobby against government’s decision to allow seismic surveys to be undertaken in our Indian Ocean. Samuel’s emphasized the plan to formulate and implement a public awareness programme that will reach out to the parties who will be directly affected by the surveys.

The workshop attendance was excellent and people affected came from all areas of KZN. Areas such as; Wentworth, Austerville, Umlazi, KwaMakhutha, Chatsworth, the Bluff and even as far as Port Shepstone. Since the seismic surveys will be done all along the Coast of the Indian Ocean, it is important to create awareness to those who live along the East Coast and depend on the ocean to survive.