Skip to content
Home/SDCEA in solidarity with Kodaikanal
Previous Next

SDCEA in solidarity with Kodaikanal 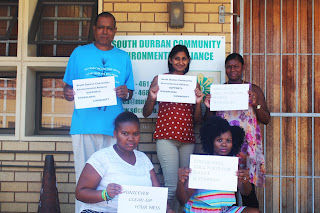 UNILEVER, CLEAN UP YOUR MESS IN INDIA!

Durban, South Africa, 7 March 2016 – Today marks the 15th anniversary of the environmental and public health disaster that occurred in Kodaikanal, India at the Hindustan Unilever mercury thermometer factory operations, where toxic mercury waste was dumped in a nearby forest and a scrapyard in a crowded part of town, killing several workers and poisoning the community.
A Government of India report found that the factory’s negligence extended even to occupational hygiene and work safety practices. The report found these to be inadequate and concluded that workers and their families had been affected due to mercury exposure of workers in the shop-floor.
In response to a call for solidarity with the community of Kodaikanal, the South Durban Community Environmental Alliance [2] called for Unilever to clean up its mess.
Former workers continue to suffer:
• Premature deaths
• Memory loss and tremors mean they remain unemployed.
• Children born with brain-impairments.
Unilever Pty Ltd. (UK) CEO, Paul Polman speaks about improving labour and human rights, ending global poverty and working towards sustainable development.
Ex-workers don’t believe his promises:
• Unilever denies ex-workers’ demands for compensation and health care.
• Unilever has downgraded the standards to which it will clean-up the factory site and its surroundings.